One of the unexpected pleasures I had whilst in lockdown was judging New Zealand’s Fonterra Dairy Woman of the Year.

As a past judge, I had initially been approached by the Dairy Women’s Network but had fended them off on the basis that I was ‘too busy’ doing other ‘very important things’ within the leadership collaboration, Play CoLab that I founded in 2016. And besides, it was sitting slightly uncomfortably with me with a vegan daughter in my ear about the dairy industry’s contribution to greenhouse gasses.

But the representative from the Dairy Women’s Network management team, Zellara, did not take no for an answer and rather than pestering me, simply persisted in a calm and measured, quietly confident manner. And as if she had planned it all along, she called again just as New Zealand was clearly preparing for business disruption. With my ‘more important leadership matters’ postponed, I found there was no reason to say no.

Leadership Lesson #1: if you want a better world rather than throwing brickbats and grenades from outside a system, leadership influence is better served from inside the system or at least on the periphery of it.

A big lesson that I have learnt over the years is this– it is better to be in a dialogue about transformation rather than simply accusing the other party of being wrong. My key collaborator, Jenny Devine, continues to remind me of the concept of being an evolutionary vs. a revolutionary (and the subject of “evolutionaries” we will address in a later post).

Zellara was so methodical and operationally excellent that I couldn’t use lame excuses like “I didn’t get the email”. She managed everything exactly as she said she would, when she said she would. Most other organizations could only dream about this sort of integrity and efficiency.

We read the finalists’ submissions then came together as a judging panel of six for only three, very thorough and focused, zoom calls. Firstly, a call to discuss all those shortlisted, then a long Zoom morning to interview the three finalists, and finally, after the overnight test, a 30-minute session to reach consensus regarding the winner.

I loved watching how Zellara calmly kept her teams in check i.e not only the team on the zoom call but also her family team as she managed her lovely children who weaved in and out of her home office.

She looked too young to be a mother but not as young as Sophie, who despite looking about 12 years old, will soon replace Alison Gibb as a Dairy Women’s Network Board Trustee. How forward-thinking of the DWN to use the opportunity of a board change as a generational handing over of the baton.

Which brings me to…

Leadership Lesson #3: Prioritise diversity of age. Move aside Boomers and stop bagging Millennials and Gen Y – you will be in good hands if you give them the room to play.

It is always a pleasure to see someone so comparatively young holding her own in a room of mainly strangers. I would not have been able to do that when I was Sophie’s age.

So what I had thought might be an unnecessary distraction to my main line of work, ended up being an experience that I will remember for some time. At Play CoLab we often work with leadership teams, taking them from the ‘forming’ or ‘storming’ stages of team development to ‘high performing’. Along the way, we consider the behaviour of individuals as well as the collective, we explore diversity and inclusion, flexing leadership styles, the ability to collaborate, and how to navigate through complexity to create order out of chaos. This DWN experience was a case study in all of these and more. Bringing me to…

And what a panel. I’ve judged a lot of awards in the past but this experience has been a standout. One of the first things I noticed on the judging panel aside from the diversity of background and age was that there was one male in the Zoom room – Grahame from Ballance Agri-Nutrients. And rather than behaving like a rooster in a hen house, he ‘leant in’ to the conversation, listened intently, and importantly let others talk first – not because he was being a chivalrous male but because he is a leader. I particularly liked the calm way Grahame put his speaker on mute while he spoke to what must have been his son wandering into the home office without a shirt (Don’t you just love Zoom?). A leader who is high on composure, I noted.

Leadership Lesson #5: Counterbalance the narrative about white middle-aged senior men in executive positions. There are some real gems and besides, the idea is to be inclusive.

(Note – What we know for sure in our work at Play CoLab is having at least ONE of man on a team of women can change a dynamic positively. Interestingly, other research has shown that you need at least 3 women in a team of men to do the same – again, a subject for another day).

Then there was Janette representing Fonterra, the largest company in NZ and the largest dairy company in the world. Janette and I always mean to catch up but never seem to get a chance but I got to spend six hours with her during the judging week. Being able to catch up ‘in action’ is so much more rewarding, as you get to really experience rather than assume alignment in thinking. And there was plenty. I noted that for someone whose workload just got a lot bigger thanks to the Covid-19 lockdown, she was unruffled. Fully present to the conversation, she was able to effortlessly switch lenses from the rational to the more emotive, from thinking to intuiting. Simply, put she’s the real deal and I thought DWN were lucky to get six hours of her time on that week during lockdown.

Leadership Lesson #6: Behind the corporate face of large organisation is an array of very impressive female leaders keeping the wheels in motion.

I also had the delight to meet Loshni a previous winner of Fonterra Dairy Woman of the Year – articulate, considered, a brilliant listener with a maturity that belied her years. The ability to take complex information, hold her own opinion at the same time, filtering it through any conscious or unconscious bias whilst reading the temperature of the group and then formulating an even sharper more considered opinion was clearly why she had previously won the title to represent the industry.

Leadership Lesson #7: If you are a leader you are leader, regardless of sector.

Then there was our facilitator DWN trustee, Alison who had championed the award from Day One, always holding the strategic intent of the organisation tightly while playing expansively.

Alison led this diverse group through a democratic process with both wisdom and curiosity. She demonstrated what Daniel Goleman would call the democratic leadership style – an open and collegial way of leading a team that needs to arrive at a consensus through participation. This is the style to bring out when the context is dynamic and rapidly changing and lots of different things need to be taken to account. Democratic leaders help ensure that the organisation or team continues to challenge its own thinking and thus mitigates the risk of it becoming out of date.

The process not only allowed time for each person to make their contribution but as a result made us all individually better. We not only made collective decisions but we learnt so much from the contribution of others who stretched our thinking. But this is only possible when the facilitator understands leadership i.e.

It was heartening that the conversation naturally lead to how leadership is more than being recognised for results – leadership lies within the interiority of a person. This is why our kauapapa at Play CoLab is ‘to raise the consciousness of leaders’. Conscious leaders understand the difference between ego and Self – a state of being in which one feels deeply connected to something greater than themselves. (Conscious maturity does not necessarily come naturally with age – let the president of the USA be a case in point).

Leadership Lesson #9: It is not just about what you are doing it is about who you are being as a leader.

My final reflection is around my own initial hesitancy to accept the gig in the first place. It ended up being so enriching to once again peer through a window into a sector where female leadership is plentiful – women who are serving in their communities, open to learning, happy to be vulnerable and self-reflective and importantly contributing to a bigger conversation for their sector and the world.

Congratulations Dairy Women’s Network – if these finalists represent the calibre of your network, I commend you…

Sandy was part of the 2020 Fonterra Dairy Woman of the Year Judging panel, collaborating with 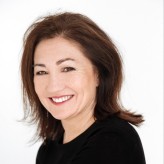 Glimpsing a New World Order
What do the stand-out current leaders have in common?